The Women Writers in History Working Group received funding in 2017 to test and develop the NEWW VRE (New approaches to European Women’s Writing) tool in line with researchers’ requirements and in view of teaching at different levels. The project allowed for:

1. further data entry and curation (by WG-members) as well as tool adapting (by Huygens IT developers)

2. testing of the VRE’s possibilities within a teaching context

The NEWW VRE is a unique information source and research tool about the reception of European women authors and their writings, from the Middle Ages until the early 20th century. As it is well known, issues concerning women’s position in the public field and the role possibly played by gender-bias during canon formation are relevant for everyone in present-day society. They can now be appropriately studied with the help of this tool, for which researchers/teachers need to pass on their skills to students. 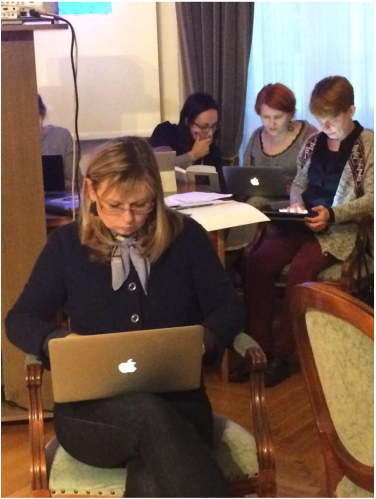 Meetings
Three meetings were held in which intensive discussions took place among the WG members:

2. WG meeting at the DARIAH Annual Event in Paris (May 2018) with cross-collaborations with other WGs

3. WG meeting in Edinburgh (June 2018), as part of the conference Cultural Encounters between North, South, West and East: Mapping the Digital Future of European Women Writers before 1900.

Results
Apart from achieving new collaborations and attracting new members in the Working Group, some concrete outputs of the project include: