George Artopoulos is the chair of the newly founded DARIAH Working Group Digital Practices for the Study of Urban Heritage. The primary goal of this Working Group is to re-discuss the attribution of cultural values to built heritage, towards more inclusive, innovative and reflective societies: for example, in conflict spaces the common heritage can be established as a bridge for peace. Unlisted historic buildings and heritage are under threat in European cities, with direct impact to the cohesion of their communities and everyday lives of citizens. Challenged by urbanization, economic difficulties, gentrification and migration, the experience of historic spaces and buildings is fragmented thus mirroring the disconnected perception of urban societies.

Responding to contemporary pressing needs of urban environments can only be achieved through transnational collaborations, as the challenges are complex and ill-defined and thus cannot be dealt with at a local scale. Thus the Working Group brings together experts from various fields of research from the international scene to reflect on these challenges and contribute creatively.

The Digital Practices for the Study of Urban Heritage Working Group acknowledges both the urgency and the complexity of these challenges, proposing a holistic and inclusive approach that can be applied to identify and tackle these socioeconomic and cultural issues.

In order to accomplish this, the WG operates in the following areas:

Despite being a new working group, it draws on communities of practices developed by previously conducted research projects, and it is supported by existing networks of research organizations, such as: the COST Action TU1306 Cyber Parks project, the H2020 VI-SEEM, the National Centre for Supercomputing Applications at the University of Illinois at Urbana-Champaign and the NCSA’s Advanced Visualization Laboratory, Urban Innovation Vienna, Union Internationale des Architectes (UIA) Greek Section, and ICOMOS Cyprus. 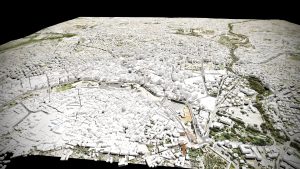 Aerial view rendering of the accurate 3D model of Nicosia which is used for the holistic study of the historic Eastern Mediterranean city, the last divided capital in Europe, cf. http://avl.ncsa.illinois.edu/realworld-software/riveel-3d.