Working Groups Stories #3: Metadatathon – Taking the DH Course Registry to the next level

Working Groups Stories #3: Metadatathon – Taking the DH Course Registry to the next level

The DH Course Registry Working Group, chaired by Hendrik Schmeer and Tanja Wissik, received funding through the DARIAH WG Funding Scheme in 2017 to run a DH Course Registry Metadatathon and explore a number of other outreach and dissemination channels. In their funding proposal, the Working Group noted that increasing the visibility of DH training activities – both on the local and the European level – is of great concern to the DH community, not only in order to attract more students, but also as a way of consolidating DH as an academic discipline. As traditional academic structures are rather resistant to the inherent interdisciplinarity of DH initiatives, the Working Group aimed, through this project, to explore dissemination channels, raise awareness and overcome barriers to reach the public outside the individual university.

The main activities developed through this funded project were:

• The “DH Course Registry Metadatathon” event
The Metadatathon was held on 24 May 2018, in Paris, France, in the context of the DARIAH Annual Event 2018. All presentations were recorded and the videos were made publicly available. Apart from the three presenters at the Metadatathon (Marianne Ping Huang, Tanja Wissik & Hendrik Schmeer), 17 persons attended the workshop while six participants were awarded travel bursaries. The participants had not only the opportunity to learn about the benefits, functionalities and quality assurance procedures of the DH Course Registry, but they could also gain “hands-on” experiences with the system and enter the metadata for their own courses. During this “hands-on” session, feedback regarding the usability of the registry was collected, mostly concerning the website and the user interface. 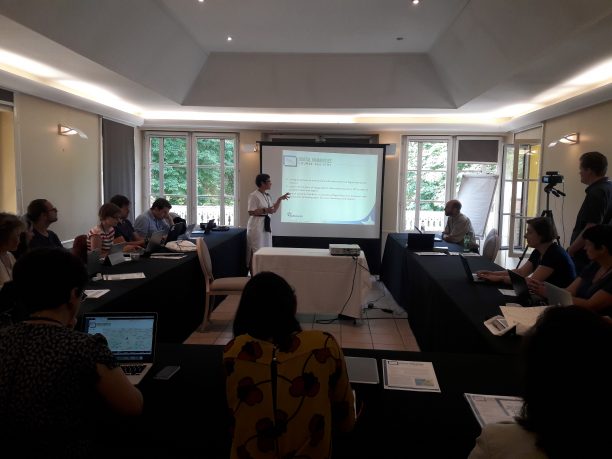 Metadatathon – Taking the DH Course Registry to the next level

• Development of outreach strategy to raise awareness for the DH Course Registry
As a result of this funded project, the Metadatathon workshop, the dissemination materials and the extended communication efforts on social media channels, the Working Group managed to raise more awareness for the Registry and expand its audience.

All these activities contributed towards making DH Course Registry a better known service, attracting more users and engaging more successfully with the DH community. Apart from that, the feedback received during the hands-on metadatathon allowed for redevelopment and improvement of some interface and usability issues of the registry. Building on the results and observations from this project, the Working Group went on developing a new project proposal submitted in the DARIAH Theme Call in 2018 on “Strategic Service Sustainability for DARIAH”.